The Canadian university system is a mess. Grades are ballooning out of control. Staff are striking and students are feeling more pressured than ever before to achieve heights they never thought they’ll need. The system is flawed and at the center, the students are feeling the full force. In this four-part editorial, I will break down 6 problems students face in Ontario. Three in part 1 and three in part 2. In part 3, I will outline what this means for the population and Ontario as a whole. Then in part 4, I will give solutions to all the problems I listed. These posts will be filled with research to outline the negatives with the system. References are at the bottom of the post. Also, this will be more focused on the universities rather than the colleges but I will include college statistics as well. Before I begin, notice I said Ontario and not Canada as Ontario students pay $2,000 more for tuition when compared to the Canadian average1.

In these posts, I will be focusing on Ontario’s top 5 colleges and universities. The top 5 universities are:

The top 5 colleges are:

The entrance marks to be accepted into a college is ridiculous. The percentages required to get accepted into your program are increasing and more elite universities such as the University of Toronto, University of Waterloo and other prestigious institutions have minimum cutoffs in the high 90s. Students in grade 11 and 12 need close to 100% averages in the final two years of high school to be admitted.

With the course requirements different for each program, challenging courses might dent the average that the student was hoping for. Not only are the students affected by these escalating grades but teachers are being more pressured to maintain a high standing within the classroom and deliver quality education regardless of the pressure of the students. It is a common theme now for the students to ask their teachers for a slight increase in their grade for a specific course as it may be the deciding factor when getting admitted. In 2013, the average percentage to get into a university in Canada was an 85%2. Since then, the average kept increasing as it reaches the 90% mark. When applying to the top 5 universities, 41% of all students who applied to the science field in 2016 had a 90+ average3. 30% of students got an 85% to 89% average4. So, 71% of all students received an 85+ average in 2016. When compared to 2006 data, only 35% of students possessed a 90+ average and 31% of students had an 85-89 average, with York University having no data6. That is 66% of students with 85+ averages. Students are getting smarter but also working harder to keep the high averages that are needed to obtain entry into their program.

But there is more. Most universities require you to complete a secondary application to outline all the hands-on experiences you obtained. They include long and short written questions, essays and sometimes video interviews. Some require a resume and reference letters to validate the information. This sometimes, depending on the university, is more important than grades. But these secondary applications interfere with the work in grade 12. Students are trying to obtain a high average while completing their supplementary applications. Another factor to add to the competition.

There are many factors that lead to this grade increase. More students are applying to more competitive fields, they are getting higher averages and universities seem to not have the resources available to handle the flux of students entering post-secondary education. On top of marks, there are other additional pressures such as extra-circulars and volunteering duties that students need to consider as they try to achieve acceptance into their program.

Striking staff members is another problem that is impacting the student population. Universities and colleges in the Greater Toronto Area were or are on strike for the semester. Last year, the Ontario Colleges went on strike, stalling thousands of students from reviving their diploma or degree. This year, the university’s teaching assistants and staff walked out putting degrees in danger. York University had four strikes since 200012, with the longest being the current one that is happening now. Currently in its 15th week, (105+ days), this strike has no ending in sight. 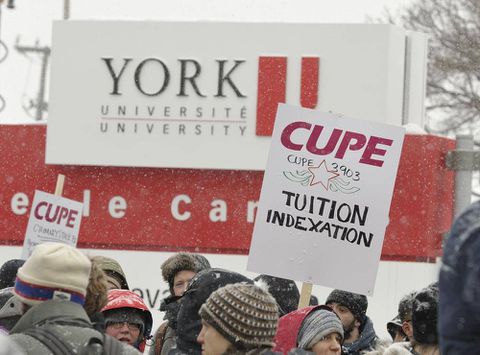 In my Instagram poll, 34% of the 76 people who voted were impacted by a strike during their time at a post-secondary school13. This might not sound as much but as students, we shouldn’t worry about when our professors or teaching assistants will walk out to demand better pay. The college strike impacted 500,000 students last year14. The York University strike has impacted 50,000 students15. Strikes impacted 550,000 in the past year. Not only was time and money wasted but graduations were delayed and job opportunities were lost. Post-secondary institutions should not be going on strike as it impacts thousands of students’ futures.

This section can be broken down into smaller sectors such as the tuition, books, rent or transportation, and food. The average for a post-secondary student in Canada, living at home is $9,300 and in residence, it nears the $20,000 mark16. The average tuition costs increased 3.1% from last year17. This led Canada’s average to be $6,57118. In my Instagram poll, I asked, “Do you pay too much for tuition?” 82% of the 90 voters said yes. To follow up, I asked, “Do you think your tuition money is being well spent at your university or college?” 72% of the 86 voters said no19. Despite paying so much for education in Ontario, students still feel that their institution is not improving their standards.

In a 2017 poll, 77% of students regretted their debt from school20. 67% of graduates had college debt and the average student debt for Canada was $22,08421. Only 33% of students were debt free after graduating. This, unlike the United States where the average nears the $40,000 range22, is unacceptable for students trying to receive an education. From 2006 to 2016, the tuition fees rose 40% in Canada23. Students are investing more time into their jobs to pay off their fees rather than focusing on their studies.

Now onto residence costs. Both colleges and universities offer places to stay for the 8 months and meal plans can be added. At the university level, most schools sell their residence options at around $8000-$9000. York University is the cheapest at the $5,00024 while Queen’s University students pay about $13,00025. Meal plans cost $2,000 at most places. Meanwhile, the colleges average out to be $7,000-$8,000. Seneca College has the cheapest residence costs at $6,00026.

Moving on, transportation costs have been increasing each year. This means that students must fund transportation costs such as public transit or their own car which includes insurance, gas and the occasional maintenance. Universities include the cost of a transit pass for the city they are situated in and it is cheaper than purchasing one individually. This helps a lot with getting to campus every day.

On top of tuition fees, there are plenty of other ways for students to fall into debt. With transportation, housing, books, materials and more, the money adds up.

With acceptance marks and tuition prices increasing every year, students in Ontario’s post-secondary system are regretting choosing a path after high school. Yearly strikes is another issue that has to be dealt with. But these are only a few of many problems we face when pursuing an education for the future.

That’s part one done. What are your thoughts on the issues? Do you feel that students should stand up to the universities and colleges to demand more? Comment below!

Part 2 will be released a week from now. Part 1 focused more on the external issues with the system. In next week’s post, I will focus more on the student pressures and workload within their school.

Thank you for reading,